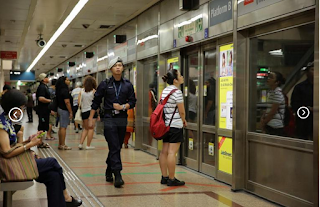 Commuters waiting for train at 11am Raffles Place 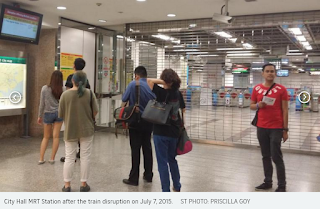 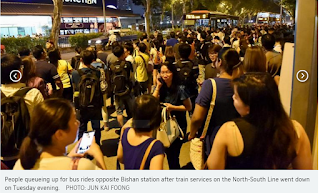 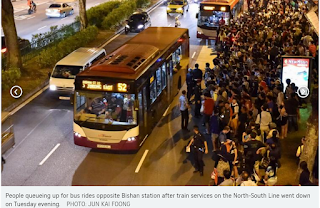 SINGAPORE - Full train service has resumed on both the North-South and East-West lines, operator SMRT said its latest update on Facebook at 10.33am on Wednesday morning.

The North-South line, which SMRT initially said might be closed from 11am-4pm for its engineers to continue investigations into what caused the crippling breakdown on Tuesday night, will remain open.
Free bus services will also be halted at noon.
Transport Minister Lui Tuck Yew, who was at Ang Mo Kio station at around 7.15am, apologised to commuters for the "massive disruption" to their Tuesday evening routines. He added that SMRT was still working to identify the root cause of the breakdown.

Mr Lui also revealed that service had resumed at 5.30am with 100 trains - down from the usual 121 during morning peak periods.
LTA later issued a statement saying that there was no power tripping observed in the morning, with SMRT gradually adding more trains into both lines to improve train frequency.
Trains are now operating at intervals of two to three minutes.
There is speculation that a faulty train could have triggered a power surge which led to a shut down of power across the entire North-South East-West Line MRT network during the evening rush hour on Tuesday.
The disruption, which occurred after 7pm on Tuesday evening, had caused an unprecedented delay on the two lines.
It is the first time that services on both the North-South and East-West Lines were affected at the same time, in what is possibly the worst MRT breakdown Singapore has experienced. Going by the scale of the breakdown and the time it occured, it is estimated that more than 250,000 commuters may have been affected.
Service on the two crowded lines was disrupted for more than two hours, affecting thousands of commuters heading home. Many had difficulty finding alternative transport as the crowd swelled, even though free bus services were activated at the affected stations.
Service on the North-South line resumed at 10.35pm, more than three hours after the disruption which occurred after 7pm. Service on East-West line resumed at slower speed after 9.30pm.
The disruption came just days after a track fault disrupted service on the North-South MRT line that affected thousands during the morning rush. Thousands of commuters left stranded by train disruption.

Large crowds formed at bus stops outside the affected stations, as commuters spilled out to find another way home.
Marketing communications manager Philip Pang, 43, waited for about an hour outside Novena MRT for a taxi. At close to 10pm, he was still waiting.
Ms Eunice Chiong, 22, said she was switching from the Circle Line to North-South Line at the Bishan MRT station. A train stopped at the Bishan MRT platform with its doors open from around 7pm to 7.20pm while commuters waited, the digital marketing executive said. Then the lights in the train went dark just as they heard an announcement that the MRT Line was down, and commuters should take other transport.
The train passengers streamed out of the train onto the platform. There was also an announcement that there will be free shuttle buses, but no directions as to where they were.
At the bus stop near Bishan MRT, a woman told her that all bus services were free, but she could not get on the buses as they were too crowded. "The buses could not even close their doors as there were too many people," Ms Chiong said.
Four buses came and went before she decided to walk to a friend's house in Ang Mo Kio where she is waiting to get a lift home to Woodlands.
Another commuter, who wants to be known only as Michelle, reached Raffles Place MRT station at about 7.15pm.
She noticed that the queue for the train on the East-West platform was "very very long". After a while, there was an announcement that there was a power fault, and commuters were requested to leave the station.
"People kept entering the station, because there was no one managing the situation on the ground," said Michelle, 28, who is in the banking industry. She estimated that there were about 300 people who were looking for alternative transport.
The Straits Times/ Top of the News                    Published on Wednesday, 8 July 2015
By Christopher Tan, Senior Transport Correspondent and Chew Hui Min