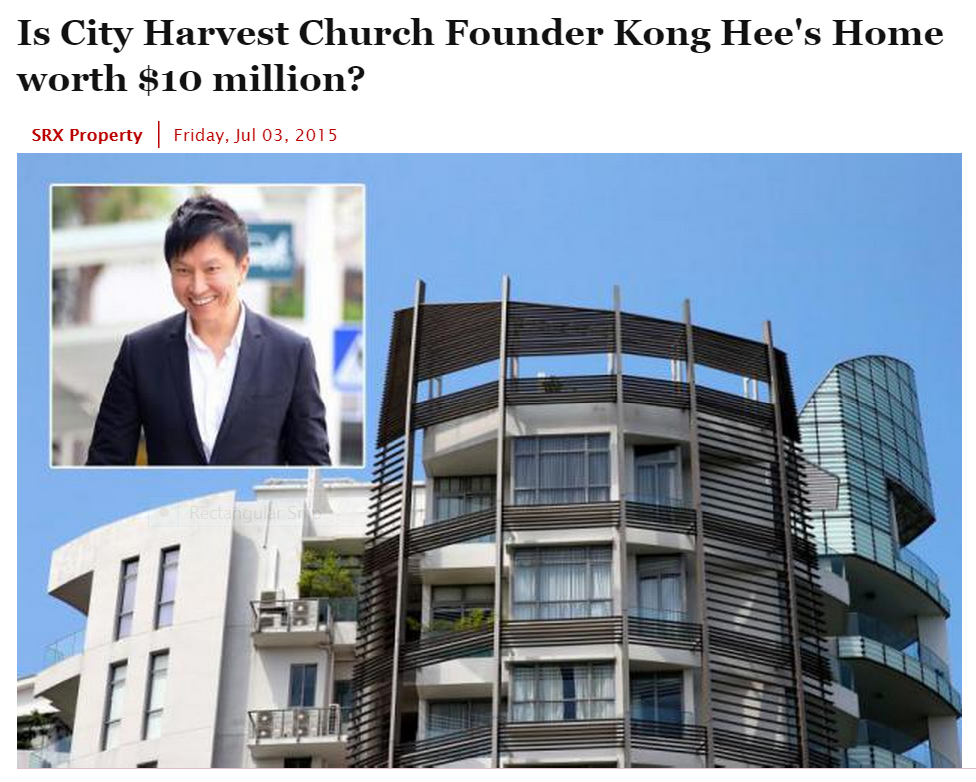 Recently the Straits Times reported that Harvest Church founder Kong Hee has put his luxury penthouse in Sentosa up for sale at $10 million.
Will he get his asking price?
First, let's look at the history of his ownership. Mr. Hong and his co-owner, Indonesian tycoon, Wahju Hanafi, paid $9.33 million in July 2007 at one of the penthouses in The Oceanfront @ Sentosa Cove.
According to the X-ValueTM calculator and X-TrendsTM on SRX.com.sg, the co-owners originally overpaid for the home by about $530,000. Based on comparable market analysis, the X-Trend below shows that the market value for the home was $8.8 million.

Even though they initially overpaid, at the time, it looked like a smart and bold investment. The market in Sentosa was booming as developers were promoting the strength of investing in Singapore globally. The market value of the penthouse skyrocketed in a matter of months, peaking in September 2007 at $11.6 million.
Next, the Global Financial Crisis (GFC) hit and the bottom fell out. The market value of the home plummeted to $6.3 million in October 2006.
However, the impact of the GFC was relatively short-lived because of the strengths of Singapore's economy, currency, property market, and low interest rates. Overseas money poured into Singapore seeking a safe haven.
The penthouse's market value rebounded to $11.5 million in May 2011, providing the co-owners with a tidy paper profit of $2.17 million.

Then, Cooling Measures kicked in, and we all know that Sentosa has been one of the regions hardest hit. Since then, though, the market value of the home has plateaued and even started to recover slightly with today's X-Value of $8.7 million.
Today's X-Value of $8.7 million suggests that a listing price of $10 million is asking too much at this moment in time, given this market's dynamics. We can understand why the co-owners are asking $10 million. They would like to make a small profit on the initial buying price of $ 9.33 million.
Kong Hee puts Sentosa Cove home on sale for $10m
Click on thumbnail to view. Story continues after photos. The Straits Times
If the home were to sell at $10 million, it would sell at a premium, or Transaction-Over-X-Value (TOX) of $1.3 million (i.e., 10-8.7).
Given the disparity between the market value, which is scientifically-calculated on best practices comparable market analysis, and the asking price, the agents of the co-owner will have a challenge to convince a buyer that there's enough qualitative uniqueness to justify the premium of $1.3 million.
What's interesting, though, is that if Mr. Wahju Hanafi had not taken a mortgage loan to finance the deal, he would stand to make a profit of $1.5 million even if he sold at today's X-Value of $8.7 million, which is $630,000 below the original purchase price.
Currency Matters in Singapore Property . In that case a Sentosa seller turned a $3.2 million loss into a $1.5 million gain. In the Mr. Hanafi's case, he also would have benefited from currency exchange. Here's the calculation:
Assume Mr. Hanafi paid half the initial purchase price of $ 9.33 million;
He converts IDR 28.1 billion  on 23 July 2007 into $ 4.67 million and purchases his half of the penthouse;
Assume he then sells the home at today's X-Value of $ 8.7 million. His half of the proceeds would be about $ 4.35 million;
He converts the $ 4.35 million into IDR and receives IDR 42.9 billion at today's foreign currency rate;
He started with IDR 28.1 billion. Thanks to the appreciation of Singapore dollar against the Indonesian Rupiah, he ends up with IDR 42.9 billion;
IDR 42.9 billion minus 28.1 billion results in a profit of IDR 14.8 billion;
At today's foreign currency rate, IDR 14.8 billion is equal to $S 1.5 million;
In summary, Mr. Hanfi's share of the loss is $315,000 [(9.33m-8.7m)/2] but he makes a profit of $1.5 million thanks to currency movements.
Business Asia One/ Real Estate                                                                          Published on Friday, 3 July 2015
Is City Harvest Church Founder Kong Hee's Home worth $10 million?