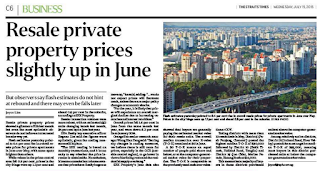 Resale private property prices showed a glimmer of life last month but even the most optimistic observers do not believe a turnaround is under way yet.
Flash estimates yesterday pointed to 0.4 per cent rise in overall resale prices for private apartments in June over May, with some spots brighter than others.
While values in the prime central area fell 0.8 per cent, prices in the city fringe were up 1.1 per cent and ahead 0.5 per cent in the suburbs, according to SRX Property.
Resale transaction volumes were more robust, with an estimated 552 units changing hands last month, 34 per cent up on June last year.
ERA Realty key executive officer Eugene Lim said the figures were optimistic, given the cooling measures still in place.
"The SRX reading is based on monthly transactions, and it is too early to say whether the price increase is sustainable. Nonetheless, it is some consolation to home owners that prices have finally begun to move up," he said, adding: "... we do not expect prices will fluctuate much, unless there are major policy changes or economic shocks.
"For the year, it is likely that prices will experience an overall marginal decline due to increasing vacancies and interest rate hikes."
Overall prices fell 1.6 per cent in June from the same month last year, and were down 6.2 per cent from January 2014. 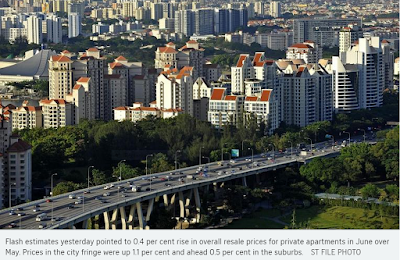 OrangeTee senior research manager Wong Xian Yang said: "Barring any changes in cooling measures, we believe there is still room for prices, especially in the OCR (outside central region), to go lower in view of declining rents and the residential supply overhang."
SRX Property's June data also showed that buyers are generally paying the estimated market value for their resale units. The overall median transaction over X-value (T-O-X) remained at $0 in June.
A $0 T-O-X means an equal number of people paid above and below, or at the computer-generated market value for their properties. The T-O-X is comparable to the previously used cash over valuation or COV.
Taking districts with more than 10 resale deals in May, District 5 (Pasir Panjang, Clementi) posted the highest median T-O-X of $30,000 followed by District 10 (Bukit Timah, Holland Road, Tanglin) and District 15 (Joo Chiat, Marine Parade, Katong) both at $14,000.
This means that a majority of buyers in these districts purchased units at above the computer-generated market value.
Among relatively active districts, District 9 (Orchard Road, River Valley) posted the most negative median T-O-X of $55,000, meaning most buyers in this district purchased units at below the computer-generated market value.