Thumbs up for Singapore-Johor Baru shuttle train. Journey lasts five minutes, the immigration queues are shorter and there is no traffic jam 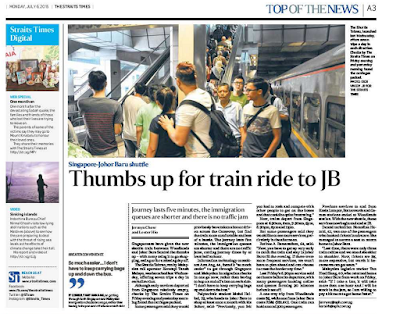 Singaporeans have given the new shuttle train between Woodlands and Johor Baru Sentral the thumbs up - with many using it to go shopping, eating or for a relaxing day off.
The Shuttle Tebrau, run by Malaysian rail operator Keretapi Tanah Melayu, was launched last Wednesday, offering seven trips a day in each direction.
Although early services departed from Singapore relatively empty, checks by The Straits Times on Friday evening and yesterday morning found the carriages packed.
Some passengers said they would previously have taken a bus or driven across the Causeway, but find the train more comfortable and less of a hassle. The journey lasts five minutes, the immigration queues are shorter and there are no traffic jams, cutting journey times by at least half an hour.

GREATER CONVENIENCE
So much easier... I don't have to keep carrying bags up and down the bus.
IT CONSULTANT ANN ANG, on getting through both Singapore and Malaysian immigration checks in one go, rather than having to hop on and off a bus on each side

Information technology consultant Ann Ang, 44, found it "so much easier" to get through Singapore and Malaysian immigration checks in one go now, rather than having to hop on and off a bus on each side. "I don't have to keep carrying bags up and down the bus."
Polytechnic student Muhd Haikal, 23, who heads to Johor Baru to shop at least once a month with his father, said: "Previously, you felt you had to rush and compete with other people to get on the buses and that could be quite frustrating."
Now, trains depart from Singapore at 6.30am, 8am, 9.30am, 5pm, 6.30pm, 8pm and 11pm.
But some passengers said they would like to see more services, particularly in the afternoon.
Retiree A. Ramanathan, 64, said: "Now, you have to get up very early to catch the train and stay in Johor Baru till the evening. If there were more frequent services, we won't have to plan ahead and can choose to cross the border any time."
Last Friday's 6.30pm service sold out hours before its departure, with many passengers booking online and queues forming 30 minutes before it set off.
A one-way trip from Woodlands costs $5, while one from Johor Baru costs RM5 (S$1.80). One train can hold around 320 passengers.
Previous services to and from Kuala Lumpur, Butterworth and Gemas stations ended at Woodlands station. With the new shuttle, these services now begin and end at JB.
Dental technician Norazlina Hamid, 42, was one of the passengers who booked tickets in advance. She managed to secure a seat to return home to Johor Baru.
"Last time, there were only three train cabins and we stood shoulder to shoulder. Now, tickets are $5, more expensive, but worth it because we can get seats."
Malaysian logistics worker Tan Huei Siong, 40, who returned home to Johor Baru from work on Friday, said: "If I take a bus, it will take more than one hour and I will be stuck in the jam, so I am willing to pay a bit more to get home faster."
The Straits Times/ Top of the News                Published on Monday, 6 July 2015
By Jermyn Chow - Defence Correspondent
and Lester Hio
Thumbs up for Singapore-Johor Baru shuttle train