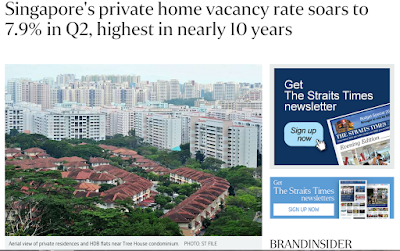 SINGAPORE - The vacancy rate for private residential units rose 0.7 percentage points to 7.9 per cent for the second quarter of this year, according to Urban Redevelopment Authority data released on Friday.
It is the highest vacancy rate recorded since 8.4 per cent in the fourth quarter of 2005.
The high vacancy rate may be read as an indication of supply coming on stream faster than demand.
It could go up further as demand remains lacklustre.
As at the end of the second quarter, there was a total supply of 61,237 uncompleted private residential units in the pipeline, excluding executive condominiums (ECs).