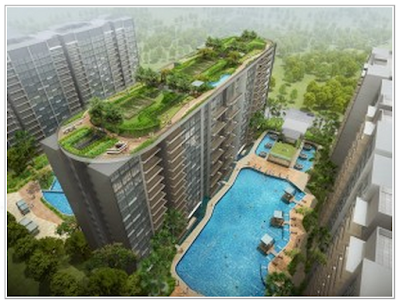 Once a naval base for the British army, Sembawang today bustles with sights and sounds of residential living.

Named after the the Kayea Ferruginea tree, also known locally as the Sembawang Tree, the Sembawang area in the early twentieth century was the site of the Nee Soon Rubber estate, and was later converted into a major naval base for the British army during colonial times. Construction works began in 1928 and was completed in 1938. During the decade-long construction period, colonial barracks were built in the area, which are now known as “black-and-white” houses because of the monochrome colours used.
After Singapore gained independence, the naval base was handed over to the government, who in 1968, converted it into a commercial dockyard (as Sembawang Shipyard) that went on to become Sembawang Corporation, a major state-owned industrial conglomerate.
Evolving through the years
Plans to develop Sembawang were first mentioned in the Urban Redevelopment Authority’s (URA) Planning Report in 1996. This Development Guide Plan, with the aid of zoning maps, highlights the various land zoning proposals, which eventually led to the creation of Sembawang New Town. Over the past two and a half decades, Sembawang has undergone huge transformation and now plays host to a vibrant public housing estate. The new town also contains some of the most communal facilities found in Singapore, such as the Sembawang MRT station, Sembawang Bus Interchange, shopping malls, and primary schools.
Improvements on housing and amenities
As a growing town, Sembawang will continue to be developed with more amenities, transport infrastructure and housing for its residents. Potential homeowners can look forward to more housing choices as new areas in the south and the east of Sembawang will be developed progressively.
“Currently, there is a limited supply of private non-landed residential projects, with only two new private non-landed launches and one executive condominium (EC) launch in recent years, namely Canberra Residences, The Nautical and Skypark Residences (EC). Canberra Residences is completely sold out, while The Nautical is 99 percent sold out as at February 2015. Sales at Skypark Residences, too, have been moving steadily since its launch in November 2013. Based on recent URA developer data, the project is currently 69 percent sold out, with 347 units out of 506 units sold.
“Looking ahead, prospective buyers can look forward to two upcoming EC projects – one is located beside Skypark Residences and will be developed by Frasers Centrepoint limited and Keong Hong Holdings Ltd, while the other project, which will be developed by Qingjian Realty, will be located along Canberra Link,” shared Wong Xian Yang, Research and Consultancy Manager, OrangeTee.
Accompanying these developments will be new facilities and amenities to serve current and future residents.
“Sembawang residents can look forward to greater convenience with the upcoming Canberra MRT station (expected to be ready in 2019), which will be located along the North-South Line between Sembawang MRT station and Yishun MRT station.
“In addition, we expect the area around Canberra MRT station to be further developed within the next few years. While the land around the station is currently undeveloped, it is unlikely that the government would let the new MRT station be underutilised when it is completed. As such, we may see more land parcels released for residential development. At this point in time, the exact mix of residential projects is still unknown, but according to the URA Master Plan, we can expect at least a mixed development to be built beside the new Canberra MRT station.
“Other upcoming major developments that may catalyse prices in the Sembawang area, would be the Woodlands Regional Centre and the North-South expressway,” added Wong.
Smoother, shorter journeys
Apart from the new Canberra MRT station, plans to enhance road infrastructure have also be unveiled so that current and future residents can look forward to faster and more convenient travel.
“Two developments coming to Sembawang are likely to attract more buyers streaming to the estate. First is the addition of a new MRT station on the North-South Line between Sembawang and Yishun. Second is the future North-South Expressway (NSE), which will reduce travelling time to and from the city. The NSE will connect the city centre with towns along the north-south corridor – Woodlands, Sembawang, Yishun, Ang Mo Kio, Bishan and Toa Payoh – via 16 in-ramps and 17 out-ramps. Advance works have started progressively from 2013 and major construction works will start in 2016,” noted Peter Poh, Chief Operating Officer, Asia Wisdom Group.
Another highlight is a new road network at Sembawang Neighbourhood 1, which will serve new developments in the area.
More jobs near home
According to the URA Draft Master Plan 2013, more industrial developments along Gambas Avenue will be built within the next couple of years, so Sembawang residents can expect more employment opportunities closer to home. The upcoming development of Woodlands Regional Centre and North Coast Water Fab Park nearby will also bring jobs closer to residents.
Bonding with family and friends
The future Sembawang Community Hub, located in a green setting by the former Admiralty House (a national monument), will be a one-stop centre for residents. Designed for social interaction and bonding, the hub is set to bring together a cluster of sports and community amenities and services for all.