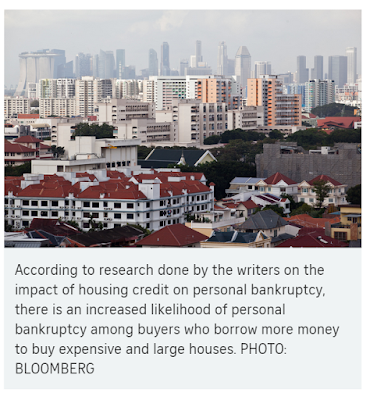 Singapore's home ownership rate of over 90 per cent is now among the highest in the world.
During Singapore's property market boom from 2009 to 2013, house prices reached an all-time high at a time when increased housing credit and record-low interest rates gave people the confidence to borrow and take on more debt to buy their homes.
Given the expectation of low interest rate in the near future, many homes are purchased with floating-rate mortgage debt.
Our prediction is that the expected and sustained increase in the Singapore Interbank Offered Rate (Sibor) will cause mortgage debt repayments to increase in the coming months.
At the same time, according to Singapore Real Estate Exchange, all non-landed property prices fell 3.2 per cent last year and analysts are forecasting continued price declines this year.
This may limit the ability of over-leveraged households, which financed their purchases during the boom, to sell their homes and fully repay their debts.
According to the Monetary Authority of Singapore (MAS), Singapore's household debt-to-income ratio had risen to 2.1 times in 2012 from a low of around 1.9 times in 2008, amid the global financial crisis.
In addition, bankruptcy orders increased to 1,992 in 2013, up a record 14 per cent from 2012. While the actual number is a relatively low proportion of Singapore's population, it is the highest number since 2009.
While the MAS introduced a total debt-servicing ratio (TDSR) in mid-2013 to help contain property prices and limit how much debt households could take on, could we start to see more people falling into personal bankruptcy if the current environment prevails?

The loan-to-value (LTV) ratio is a key criterion for a homebuyer applying for a housing loan. It is used by banks to represent the mortgage amount as a percentage of the total valuation of the property... In general, the higher the LTV ratio, the riskier the loan is for a lender.

In a recent research paper, we examined the impact of housing credit on personal bankruptcy among 150,000 housing transactions from 1995 to 2012.
We found an increase in the likelihood of personal bankruptcy among house buyers who bought expensive and large houses, and thus borrow more money for their houses.
Borrowing money to buy a home may be unavoidable, but getting into too much debt that leads to bankruptcy can significantly change your life.
While changes in cultural values have encouraged a more entrepreneurial spirit and declaring bankruptcy no longer carries the stigma it once did, it still becomes difficult to find a job or manage a business, get future loans, mortgages and credit cards as well as travel overseas.
THE LTV FACTOR
The loan-to-value (LTV) ratio is a key criterion for a home buyer applying for a housing loan. It is used by banks to represent the mortgage amount as a percentage of the total valuation of the property. For example, if a home buyer borrows $800,000 to purchase a $1 million property, the LTV ratio is 80 per cent.
In general, the higher the LTV ratio, the riskier the loan is for a lender. In Singapore, a bank can grant an individual a credit facility for the purchase of a residential property with an LTV limit of up to 80 per cent, subject to certain conditions being satisfied.
In the same study, we analysed the trends in personal bankruptcy when the MAS increased the LTV limit to 90 per cent in 2005 (from a previous limit of 80 per cent set in 1996) and when the limit was lowered again to 80 per cent in 2010.
Before the increase in LTV in 2005, those who bought expensive houses were less likely to become bankrupt. This was likely because they were rich enough to afford expensive houses. However, after the increase in the LTV limit, the likelihood of bankruptcy for those who bought expensive houses was similar or larger than those who bought relatively cheaper houses.
The increase in LTV limit increases the likelihood of becoming bankrupt by 0.15 per cent to 0.20 per cent for those who bought expensive houses.
Why does the increase in LTV limit increase bankruptcy for those who bought expensive houses? There are two possible explanations.
The first is through composition effect: an increase in the LTV limit encourages house buyers to buy more expensive houses than they could afford before. We exploit another housing policy change in 2002 as a control experiment. On Sept 1, 2002, while maintaining the LTV at 80 per cent, the MAS reduced minimum cash payment from 20 per cent to 10 per cent of housing value. Savings in the Central Provident Fund can be used for the remaining 10 per cent of housing value.
As the LTV limit did not change in 2002, house buyers cannot borrow more, given the same house value. Because minimum cash payment was reduced from 20 per cent to 10 per cent of housing value, house buyers can buy expensive houses they could not have afforded before. If composition effect is the primary contributing factor, the 2002 policy change should have a similar effect to the 2005 policy. However, we find no effects.
The second is the debt-burden effect: After the increase of the LTV limit, house buyers can borrow more, given the same house value, but they have to pay a larger monthly payment, increasing their vulnerability to bankruptcy.
Compared with purchasing a relatively cheaper house, we found that purchasing a relatively more expensive house increases the likelihood of one becoming a defendant in a credit-related lawsuit by 0.15 to 0.20 percentage point. The results support that increasing debt is crucial to determine homeowners' financial well-being even if they still buy the house they can afford before.
Furthermore, the study found that those who filed for bankruptcy were more likely to sell their houses before bankruptcy with low return, suggesting that home owners use house sales to manage their financial situations.
While the number of personal bankruptcies is still relatively low and does not pose a risk to the economy, the link between the increase in housing credit and personal bankruptcy cannot be ignored.
Given the challenges that come with personal bankruptcy, our advice would be to consider the unintended consequences of credit before taking on high levels of household debt to buy homes.
•The first writer is Vice-Dean of Research and Low Tuck Kwong Professor at the National University of Singapore (NUS) Business School, and the second writer is Assistant Professor of Economics, NUS Faculty of Arts and Social Science.
The Straits Times / Opinion                                             Published on Saturday, 4 July 2015     Sumit Agarwal and Changcheng Song
The impact of housing credit on personal bankruptcy