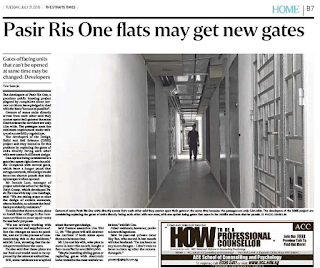 Gates of facing units that can't be opened at same time may be changed: Developers

The developers of Pasir Ris One, a premium public housing project plagued by complaints about narrow corridors, have pledged to deal with the issue "as soon as possible".
Owners of some units directly across from each other said they cannot open their gates at the same time because the corridors are only 1.2m wide. The passages meet the minimum requirement under safety and accessibility regulations.
The developers of the Design, Build and Sell Scheme (DBSS) project said they intend to fix this problem by replacing the gates of units directly facing each other with new ones of a different design.
One option being considered is a gate that opens right down the middle. Compared with current gates, which have a longer panel that swings outwards, this design would have two shorter panels that take up less space when opened.
Mr Dennis Lam, manager of project administration for the SingHaiyi Group, which developed Pasir Ris One with Kay Lim Holdings, said: "We are taking steps to alter the design of certain elements, where feasible, to address the feedback provided by residents."
He added that there are also plans to install false ceilings in the common corridors to cover up air vents for aesthetic purposes.
"We are actively working with our contractor and suppliers to effect the changes as soon as possible, and are in the process of communicating this to the residents," said Mr Lam, stressing that the developers would bear the costs.
He also said that these plans are not final and would need to be approved by the relevant authorities.
Still, some residents are sceptical about the new gate design. 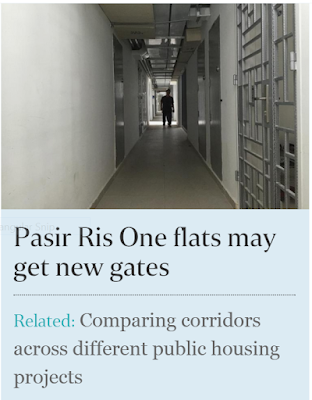