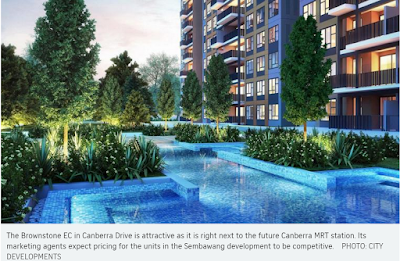 Asia's first large-scale residential project to be built with prefabricated prefinished volumetric construction (PPVC) will go on sale soon.
Cutting-edge PPVC, which has been likened to Lego blocks, boosts productivity and workplace safety.
E-applications for The Brownstone executive condominium (EC) in Sembawang by City Developments (CDL) and related company TID - a joint venture between Hong Leong Group and Japan's Mitsui Fudosan - will start today.
The 638-unit EC in Canberra Drive is attractive as it is right next to the future Canberra MRT station, marketing agents said. It is set to get its temporary occupation permit in 2019, the same year the MRT station on the North-South Line is expected to open.
Unit sizes range from a 732 sq ft two-bedroom unit to 1,711 sq ft for a five-bedroom penthouse.
Indicative pricing is $599,000 to $680,000 for a two-bedroom flat, $699,000 to $820,000 for a three- bedder, $869,000 to $990,000 for a four-bedder and $1.318 to $1.38 million for a penthouse.
"It is quite attractive that a family-size unit, even a four-bedroom apartment is below $1 million," said Mr Eugene Lim, key executive officer of marketer ERA Realty.
While the pricing can be confirmed only closer to booking date, it is set to be competitive, said Mr Mohd Ismail, chief executive of PropNex Realty, the co-marketer.
"Developers are generally taking into consideration that buyers have many choices, and are cutting margins to ensure that take-up is substantial at initial launch," he said.
Recent competitively priced ECs, The Amore in Punggol and Westwood Residences in Jurong, managed to get close to 30 per cent take-up in the first month, he said.
Several ECs are expected in Sembawang, including Skypark Residences in Sembawang Crescent, which has about 127 unsold units; and next to Skypark, an EC by a tie-up between units of Frasers Centrepoint and Keong Hong Holdings. Qingjian Realty won an EC site next to The Brownstone last October.
The Brownstone, inspired by New York's brownstone houses, will have eight blocks of up to 12 storeys each, CDL said yesterday. "Given the development's strong locational attributes, we expect keen interest for The Brownstone," said Mr Chia Ngiang Hong, CDL group general manager.
Bookings will be on July 25.
The Straits Times/ Business                                                     Published on Friday, 10 July 2015                                            By Rennie Whang                              CDL exec condo to be built with cutting-edge technology