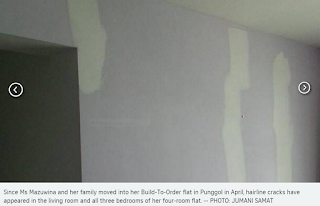 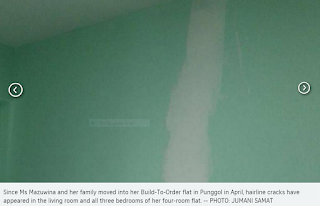 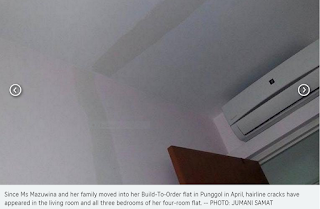 THREE weeks after moving into their new flat in Punggol last month, technician Jumani Samat and his wife Mazuwina Mohamad noticed cracks on the walls of their living room and bedrooms.
They called the building services centre of their Build-To-Order (BTO) project, Waterway Banks, and workers came to their flat twice to plaster over the cracks. But more cracks started appearing after that.
"We are worried about safety," said Mr Jumani, 35, who lives in the four-room flat with his wife and two children.
The Straits Times counted at least 15 hairline cracks on the walls and ceilings of all the unit's rooms when it visited yesterday. Some were about 2m long.
"It's very unsettling because it keeps recurring. You patch up in one place, and another crack pops up next to it," said Mr Jumani's wife Mazuwina, 34, who is a housewife. Other residents in the development said they have spotted cracks on their walls too.
The Housing Board, in response to media queries, said less than one-fifth of the 850 households that collected their keys since last November have reported wall cracks.
An HDB spokesman said these cracks are "non-structural hairline cracks", which may be caused by the shrinkage and expansion of building materials, or movement, such as renovation vibrations.
She added that the cracks do not affect the structural integrity of the block.
According to an industry standard for quality assessment, HDB flats scored above the national average last year. This, however, is cold comfort for residents like housewife Wong Lai Kuan, 40, who moved in in March and found one crack in her living room and another in her daughter's bedroom. "It's a new flat - why should it crack in the first place?"
Building services centres are set up at newly completed public housing projects for home owners to report defects. They have a one-year period after collecting their keys to have defects rectified by the building contractor.
"It's tedious to keep having to plaster and repaint the walls," said security officer Mohamad Rizan Mazlan, 39, who found at least eight cracks in his flat since collecting his keys in February.
Yesterday, the Straits Times visited Mr Mohamad Rizan's four-room flat with a professional home inspector from Inspect First, who concluded the cracks do not affect structural safety.
"Our inspector found that it's a crack in the plastering, not in the wall itself," said the firm's business development executive Shaun Wee, 26. "It's a common problem that could be caused by the kind of materials that went into the plaster mixture."
Wall cracks and other defects have also plagued some residents at another new HDB development nearby, Waterway Terraces I.
Freelance writer and Web designer Paul Gian, 33, has had to deal with two wall cracks and uneven flooring since collecting the keys to his Waterway Terraces I flat in February.
He said his project's building services centre has yet to rectify the flooring defects even after three months. "I'm very angry and frustrated," said Mr Gian. "I can't start my renovations or move in until they resolve the defects. If not, they might say my contractors caused the problems."
The Straits Times/ S'pore                                                      Published on Thursday, 21 May 2015                                               By  Chew Hui Min                                           Cracks appearing in new BTO flats in Punggol, says residents