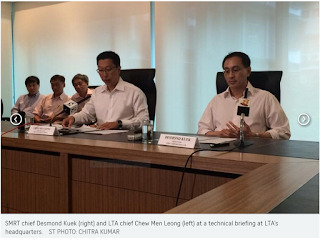 In a press briefing co-chaired by LTA chief executive Chew Men Leong, Mr Kuek said: "We had to systematically check trains, tracks and power. We will continue to check and minimise such occurrences. We are committed to bringing high efforts of train reliability to commuters."
Mr Chew also apologised for Tuesday evening's disruption which lasted about three hours and affecting an estimated 250,000 commuters, possibly the worst public transport disruption Singapore has experienced.

"LTA and SMRT staff worked overnight and conducted visual and impedance checks. At this juncture, there is no abnormality," Mr Chew said.
He added that a decision was made not to halt the North-South line from 11am to 4pm. SMRT had earlier said service on the North-South line would be suspended for engineers to carry out more investigations on the cause of the breakdown.
"We will continue to check and get down to the root cause of the power trip," Mr Chew said.
LTA said on Tuesday night that a faulty train could have caused the power to trip.
Taking reporters through the chronology of events on Tuesday evening, SMRT's managing director of trains Lee Ling Wee said the first traction of power tripping was experienced at 5.59pm. Within a few minutes, 20 counts of traction power trip occurred at multiple locations across the network.
SMRT managed to reset the trippings and commuter services were maintained, he said. At close to 7pm, SMRT realised that the trip could not reset and a total of five trains had stalled between stations, Mr Lee explained.
Within a few minutes, two more trips happened.
"So we decided to stop the service and detrain the passengers onto station platforms in the interests of passenger safety," Mr Lee said, adding that all trains were cleared of passengers by 7.30pm.
On why it took so long for the authorities to locate the fault, Mr Lee said: "The key is to identify whether the breakdown was in the trains, the tracks or power substations."
"When there are more trains running, the chances of having a power trip is higher," he added.
A total of 115 trains were running during peak hour on the two lines. One of the trains was found to have heavy arcing, or electrical spark, Mr Lee said.
On the situation this morning, Mr Lee said the train service started slowly and there were no trips. They managed to achieve peak-hour norm of two-minute intervals for train arrivals.
Explaining the reason for stopping the train services and detraining passengers at the platform, Mr Kuek said the primary concern was safety of the passengers.
When asked if the authorities should have caught the problem before it hit, Mr Kuek said: "As the system ages, it does not necessarily ages in a linear way and the prediction of the mean time between failures becomes something not quite so easy to determine.
"We can shorten our mean time between failures, we can step up our maintenance regime and intensify the amount of maintenance checks that we do on a regular basis but it will still not be able to 100 per cent catch every one of this potential faults that can take place especially when the system is at the age that it is," he explained.
Mr Kuek added that SMRT is working on installing sensors, and condition monitoring tools to monitor the situation and predict failures on trains and tracks.
"So that as and when in real time, things fail, we have triggers that allow us to take preventive actions based on predicted model and where that failure might be, this is part of the technology that we are working to put in place - both on the tracks as well as on the trains," he said.
"To bring higher rail reliability there will be road bumps," he added.