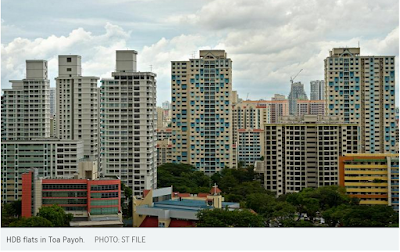 Data lifts hopes of recovery; prices of resale flats inch up 0.1% in further sign that market may be stabilising

The resale volume for Housing Board flats rose to its highest in two years last month, further signalling a market recovery.
There were 1,709 HDB flats sold in June, up by more than 8 per cent from the 1,575 units in May, according to the latest SRX Property data.
This is the highest since May 2013, and a third up from last June.
Resale prices also inched up by 0.1 per cent last month, after rising by 0.2 per cent in April and staying flat in May. While prices of three-room flats dipped by 0.2 per cent, those of four-room, five-room and executive flats were up by 0.3 per cent, 0.5 per cent and 0.7 per cent respectively.
This comes after months of prices heading south, following the introduction of market cooling measures such as an increased mortgage servicing ratio limit.

SELLERS FACE UP TO REALITY
They were waiting for prices to go back up. But some have become more realistic and don't want to make a bigger loss.
MR DONALD YEO, head of agency and training at real estate firm DWG, about sellers having come to terms with the weaker market

Said ERA Realty key executive officer Eugene Lim: "This adds strength to the proposition that HDB resale prices are stabilising." He noted prices have "practically remained unchanged" since March.
SLP International Property Consultants research head Nicholas Mak said the higher resale volume could indicate a sustainable level of demand - an "essential ingredient" for steady price growth.
Mr Donald Yeo, head of agency and training at real estate firm DWG, said this is a sign that more sellers have come to terms with the weaker market: "They were waiting for prices to go back up. But some have become more realistic and don't want to make a bigger loss."
Mr Lim expects resale volume to stay resilient as the Government eases the Build-To-Order (BTO) flat supply, and buyers with immediate housing needs turn to resale units.
But experts believe that any rebound in prices will be slow, partly due to ongoing cooling measures.
R'ST Research director Ong Kah Seng believes buyers will remain selective "amid ample choices of flats put up for sale".
Despite the hint of an uptick, overall resale prices last month were still down 4.4 per cent from a year before, and almost 11 per cent from the peak in April 2013. Resale volume was also still more than half down from its peak of 3,649 units in May 2010, said SRX Property.
Sellers, like a housewife who wanted to be known only as Mrs Lee, remain worried. She and her husband put their four-room Sembawang unit on the market three months ago, after they collected the keys to their new flat in Serangoon. "I have had no luck so far and have only three more months to sell it off," said the mother of four, who is in her late 30s.
HDB flat owners have to sell their existing flat within six months of getting their new HDB home.
Said Mrs Lee: "I don't want to lower my price further because I still have to pay a $40,000 resale levy."
The Straits Times/ S'pore                                        Published on Friday, 10 July 2015                                                       By Yeo Sam Jo                                                           HDB resale volume hits two years high in June