Teck Ghee estate to get $38m 'green' makeover. It will be fitted with facilities like automated waste collection system, energy-saving lights 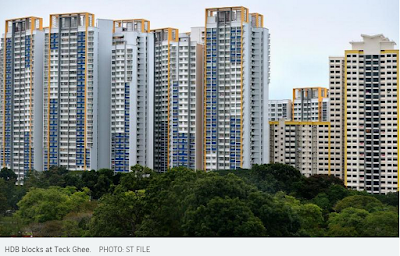 Ang Mo Kio's Teck Ghee estate is set to undergo a $38.3 million revamp to transform it into Singapore's second "green" neighbourhood.
More than 5,800 households there will see their estate installed with environmentally friendly features, the Housing Board (HDB) revealed yesterday.
It comes under the HDB's Greenprint programme, which aims to fit existing public housing estates with eco-friendly technology and follows a pilot project in Jurong's Yuhua estate.
From now until 2018, works will be carried out to equip 40 blocks in Teck Ghee - Blocks 401 to 421 and 456 to 476 - with facilities such as an automated waste collection system, smart lighting, rooftop solar panels and more greenery.
An additional 1.4km of pedestrian and cycling paths will be added to the neighbourhood while sensor technology will also be installed at the blocks, which are nearing 40 years old. Energy-saving lighting in common areas will be fitted with sensors that dim the bulbs when nobody is around.

MORE CYCLING, PEDESTRIAN PATHS
My boys cycle often so it's good to have more paths for them. It's safer too.
MR THETCHNAMUTHI DHARMALINGAM, who has lived in Teck Ghee for 15 years

Minister of State for Health and Sengkang West MP Lam Pin Min said yesterday that these efforts will help residents use resources more efficiently and added that features like enhanced cycling and pedestrian paths will help families to "spend more quality time strolling or cycling together, for a healthier lifestyle".
Secondary school teacher and father of two Thetchnamuthi Dharmalingam, 59, who has lived in Teck Ghee for 15 years, said: "My boys cycle often so it's good to have more paths for them. It's safer too.
"I feel proud that my old estate is getting a makeover."
Financial secretary Darice Tay, 61, who has called Teck Ghee home since 1979, is looking forward to having more greenery and energy-saving lights. She said: "It will be a better-looking estate. It's high time for a change."