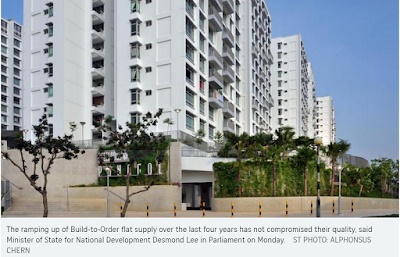 SINGAPORE - The ramping up of Build-to-Order flat supply over the last four years has not compromised their quality, said Minister of State for National Development Desmond Lee in Parliament on Monday.
And although the HDB is not involved in the development and sale of premium Design, Build and Sell Scheme (DBSS) public flats, it still "plays an active role in ensuring a fair and satisfactory outcome", he added.
He was replying to questions from four Members of Parliament about homeowners' complaints regarding defects in DBSS and BTO flats, which have made headlines in recent months.
On average, for flats under the HDB's BTO programme, about a third of all new residents approach the Building Service Centre for help after collecting their keys, said Mr Lee.
About a quarter of requests for help relate to issues such as low water pressure due to compliance with water saving measures, and paint stains that need to be cleaned.
The rest relate to defects, with "the vast majority" being surface imperfections such as hairline cracks on walls, scratches on timber floor, or uneven tile joints, which do not affect the building's structural integrity, said Mr Lee.
He added that the number of defects reported has not changed significantly over the years. They are also mostly within "acceptable industry norms", common in private developments too, and can and should be rectified quickly by contractors, said Mr Lee.
According to the Building and Construction Authority's independent assessment of building quality - through the Construction Quality Assessment System (CONQUAS) score - BTO flat quality has risen from a score of 79 in 2003 to 89 in 2014, he added.
Mr Lee said: "It continues to rise and is comparable to that in private developments."
He added that the HDB takes quality seriously but "due to the high dependency on workmanship of individual workers, we can expect that there will be some defects".
"Sometimes, this could be due to differences in the understanding of what constitutes a defect. For example, some owners have given feedback on colour inconsistencies for floors with timber finishes. As timber is a natural product, it is not possible to achieve a completely homogenous look," said Mr Lee. "But we do have zero tolerance for defects which may compromise structural or safety standards, or which deviate significantly from what has been promised to buyers."
Mr Zaqy Mohamad (Chua Chu Kang GRC) noted that in Australia, payment to the main contractors is held back until defects are fixed. He asked if the HDB could postpone the start of payment for BTO homeowners, if repairs are delayed.
Mr Lee replied that developers are already required to address defects within a month. If they do not, the buyer can give notice, get it fixed and then make a claim for reimbursement. "So in a way we shouldn't have delays in rectification," he said.
For DBSS projects, private developers build and sell flats directly to the buyers. Mr Lee said that feedback on the quality of finishes in DBSS projects differs from project to project.
But DBSS developers are contractually obliged to build the DBSS units in a "good and workman-like manner", under the sale and purchase agreement between the developer and the home buyers, he added.
And as with BTO projects, defects must be rectified within the one-year defects liability period.
Mr Lee said residents can report issues to the Building Service Centre managed by the developer during the defects liability period, and can take legal action if the developer fails to address these.
Non-Constituency MP Yee Jenn Jong noted that the official intent of the DBSS scheme is "to meet the housing aspirations of higher income flat buyers for better design and finishes".
"So do all these complaints signify that DBSS has actually failed in the intent?" he asked.
Mr Lee replied that it was important to note that there have been 13 DBSS projects since 2005 in which many residents have bought homes.
"Not to trivialise the defects and the concern that first-time homebuyers in particular feel when they see scratches or paint marks on their units or more serious defects, but I think you shouldn't... use these current few points that have been in the public eye to condemn the entire scheme as a failure," he said.
Mr David Ong (Jurong GRC) and Mr Baey Yam Keng (Tampines GRC) asked about the HDB's role in overseeing DBSS projects, while Workers' Party MP Low Thia Khiang (Aljunied GRC) asked if the HDB takes responsibility to make sure that DBSS defects are rectified.
Mr Lee said that private developers take responsibility, as the sale and purchase agreement is between residents and the developer.
For DBSS projects, the HDB only sets buyer eligibility rules and provides broad planning parameters such as the mix of flat sizes and the range of facilities.
But that is not to say that the HDB does nothing at all, he added.
With the Trivelis DBSS project in Clementi, for instance, the HDB followed up with the developer and "worked behind the scenes" to seek a resolution.
The Straits Times/ S'pore                                            Published on Monday, 13 July 2015              By Janice Heng                                                                                                                              Parliament: Ramp up in building of BTO flats has not compromised quality, says Desmond Lee


Centrale 8: Complaints can still be filed on site