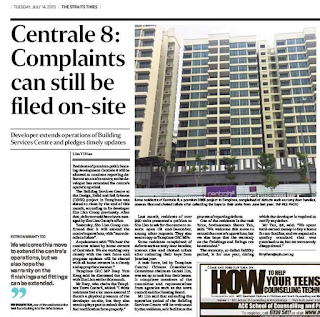 Residents of premium public housing development Centrale 8 will be allowed to continue reporting defects at an on-site centre, as the developer has extended the centre's operation period.
The Building Services Centre at the Design, Build and Sell Scheme (DBSS) project in Tampines was slated to close by the end of this month, according to its developer Sim Lian Group previously. After that, defects would have been managed by Sim Lian Group's office.
Yesterday, Sim Lian Group confirmed that it will extend the centre's operations, with "more details to follow".
A spokesman said: "We hear the concerns raised by home owners of Centrale 8. We are working very closely with the task force and progress updates will be shared with all home owners in a timely and appropriate manner."
Tampines GRC MP Baey Yam Keng said he discussed the issue with Sim Lian earlier this month.
Mr Baey, who chairs the Tampines Town Council, added: "I think residents feel a lot more assured if there's a physical presence of the developer on-site, but they also need to play a part to submit the defect rectification form properly."

EXTEND WARRANTY TOO
We welcome this move to extend the centre's operations, but we also hope the warranty on the finishings and fittings can be extended.''
MR SHAWN TAN, one of the residents in the task force looking into the defects issue

Last month, residents of over 350 units presented a petition to Sim Lian to ask for the centre to remain open till end-December, among other requests. They also sent a copy to Tampines GRC MPs.
Some residents complained of defects such as rusty door handles, uneven tiles and choked toilets after collecting their keys from June last year.
A task force, led by Tampines Central Citizens Consultative Committee chairman Gerald Lim, was set up to look into their issues. It comprises members of the committee and representatives from agencies such as the town council and the Housing Board.
Mr Lim said that extending the operation period of the Building Services Centre will be welcomed by the residents, as it facilitates the process of reporting defects.
One of the residents in the task force, businessman Shawn Tan, said: "We welcome this move to extend the centre's operations, but we also hope that the warranty on the finishings and fittings can be extended."
The warranty, or defect liability period, is for one year, during which the developer is required to rectify any defect.
Mr Tan, 38, said: "We spent hard-earned money to buy a home for our families, and we expected a quality standard that was promised to us, but we were sorely disappointed."