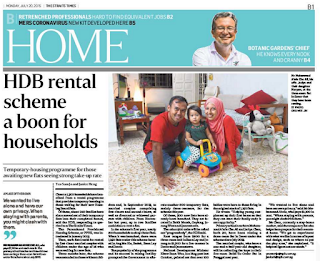 Close to 1,300 households have benefited from a rental programme that provides temporary housing to those waiting for their new Housing Board flats.
Of these, about 240 families have since moved out of their temporary flats into their completed homes, said the HDB, responding to queries from The Straits Times.
The Parenthood Provisional Housing Scheme, or PPHS, was introduced in January 2013.
Then, such flats could be rented by first-timer married couples with children under the age of 16 who were waiting for new flats.
Three months later, the scheme was extended to those without children and, in September 2013, to married couples comprising first-timers and second-timers, as well as divorced or widowed parents with children. From November last year, up to two families could also co-rent a flat.

A PLACE OF THEIR OWN
We wanted to live alone and have our own privacy. When staying with parents, you might clash with them.
'MR MUHAMMAD A'SRIE CHE ALI, who pays $1,100 in rent each month. The primary school teacher and his wife have been renting a three-room flat in Dover under the scheme since July 2013.

In the scheme's first year, nearly 800 households took up these flats. When it was launched, there were 1,150 flats under this scheme located in Ang Mo Kio, Bedok, Boon Lay and Dover.
The popularity of the programme and its success in raising fertility prompted the Government to allocate another 800 temporary flats, mainly three-roomers, for the scheme this year.
Of these, 300 new flats have already been launched. They are located in Bukit Merah, Geylang, Jurong West and Queenstown.
The other 500 units will be rolled out "progressively", the HDB said.
Rent ranges from $800 for a three-room unit in Boon Lay and Jurong to $1,900 for a five-roomer in Dover and Queenstown.
National Development Minister Khaw Boon Wan, in a blog post last October, pointed out that over 100 babies were born to those living in the original stock of 1,150 flats.
He wrote: "Helping young couples set up their first home so that they can start their family early is our top priority."
Primary school teachers Muhammad A'srie Che Ali and Jaclyn Chen, both 30, have been renting a three-room flat in Dover under the scheme since July 2013.
The married couple, who have a one-and-a-half-year-old daughter, will be collecting the keys to their five-room Build-To-Order flat in Punggol next year.
"We wanted to live alone and have our own privacy," said Mr Muhammad A'srie, who pays $1,100 in rent. "When staying with parents, you might clash with them." 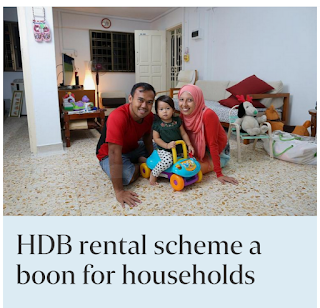 Ms Chen, currently a stay-home mother, said the temporary flat also helps them prepare for their eventual home. "We get to experiment with what we like in terms of layout and design, such as where to put the play area," she explained. "It helps us figure out our needs."