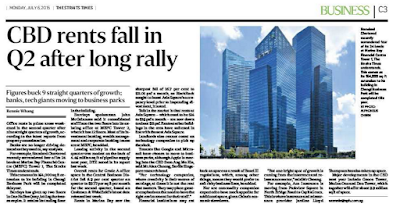 Office rents in prime areas weakened in the second quarter after nine straight quarters of growth, according to the latest reports from property consultancies.
Banks are no longer driving demand as they used to, say analysts.
For example, Standard Chartered recently surrendered four of its 24 levels at Marina Bay Financial Centre (MBFC) Tower 1, The Straits Times understands.
This comes as its 154,000 sq ft extension to its building in Changi Business Park will be completed this year.
Barclays has given up two floors in One Raffles Quay, letting the leases expire. It retains its trading floor in the building.
Barclays spokesman John McGuinness said it consolidated staff from the two floors into its existing office at MBFC Tower 2, where it has 12 floors. Most of its investment banking, wealth management and corporate banking teams are at MBFC, he added.
Leasing activity in the second quarter was modest on the back of 4.45 million sq ft of pipeline supply next year, DTZ noted in its report last week.
Overall rents for Grade A office space in the Central Business District fell 6.3 per cent quarter on quarter to $9.77 per sq ft per month for the second quarter, based on Cushman & Wakefield's latest data released last week.
Rents in Marina Bay saw the sharpest fall of 16.7 per cent to $11.01 psf a month, as BlackRock sought to boost Asia Square's occupancy level prior to impending divestment, it noted.
Talk in the market is that rents at Asia Square - which used to be $14 to $15 psf a month - are now down to about $11 psf. Rents at other buildings in the area have softened in line with those at Asia Square.
Landlords also cannot count on technology companies to pick up the slack.
Tenants like Google and Microsoft have chosen to move to business parks, although Apple is moving into the CBD from Ang Mo Kio, said Mr Alan Cheong, Savills Singapore research head.
"For technology companies, where creativity is their source of earnings, at times it is not the rent that matters. They may place greater emphasis on the need to have the right environment for their staff."
Financial institutions may cut back on space as a result of Basel III regulations, which, among other things, means they would prefer to exit risky business lines, he added.
Nor are commodity companies expected to have much appetite for additional space, given China's economic slowdown.
"But one bright spot of growth is coming from the insurance and reinsurance sector," said Mr Cheong.
For example, Ace Insurance is moving from Parkview Square in North Bridge Road to CapitaGreen. This is where insurance and reinsurance provider Jardine Lloyd Thompson has also taken up space.
Major developments in the CBD next year include Guoco Tower, Marina One and Duo Tower, which together will offer about 3.3 million sq ft of space.
The Straits Times/ Business                                Published on Monday, 6 July 2015                           By Rennie Whang                                                  CBD rents fall in Q2 after long rally