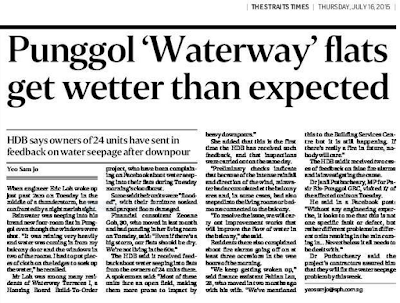 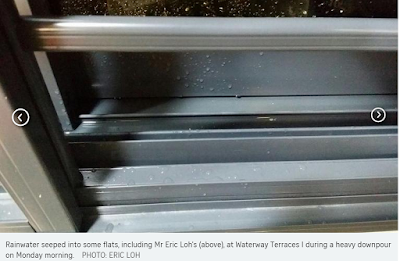 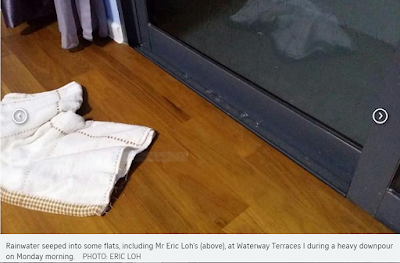 HDB says owners of 24 units have sent in feedback on water seepage after downpour.

When engineer Eric Loh woke up just past 2am on Tuesday in the middle of a thunderstorm, he was confronted by a nightmarish sight.
Rainwater was seeping into his brand new four-room flat in Punggol even though the windows were shut. "It was raining very heavily and water was coming in from my balcony door and the windows in two of the rooms. I had to put pieces of cloth on the ledges to soak up the water," he recalled.
Mr Loh was among many residents of Waterway Terraces I, a Housing Board Build-To-Order project, who have been complaining on Facebook about water seeping into their flats during Tuesday morning's cloudburst. 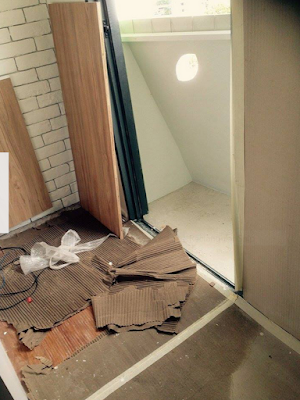 Resident Terrence Tan's 10th floor flat (above) was one of the units at Waterway Terraces I in Punggol that was soaked by rain during a heavy downpour. PHOTO: ERIC LOH

Some said their units were "flooded", with their furniture soaked and parquet floors damaged.
Financial consultant Zeoane Goh, 30, who moved in last month and had ponding in her living room on Tuesday, said: "Even if there's a big storm, our flats should be dry. We're not living in the 60s."
The HDB said it received feedback about water seeping into flats from the owners of 24 units there. A spokesman said: "Most of these units face an open field, making them more prone to impact by heavy downpours."
She added that this is the first time the HDB has received such feedback, and that inspections were carried out on the same day.
"Preliminary checks indicate that because of the intense rainfall and direction of the wind, rainwater had accumulated at the balcony area and, in some cases, had also seeped into the living rooms or bedrooms connected to the balcony.
"To resolve the issue, we will carry out improvement works that will improve the flow of water in the balcony," she said.
Residents there also complained about fire alarms going off on at least three occasions in the wee hours of the morning.


"We keep getting woken up," said finance assistant Fabian Lau, 28, who moved in two months ago with his wife. "We've mentioned this to the Building Services Centre but it is still happening. If there's really a fire in future, nobody will care."
The HDB said it received two cases of feedback on false fire alarms and is investigating the cause.
Dr Janil Puthucheary, MP for Pasir Ris-Punggol GRC, visited 17 of the affected units on Tuesday.
He said in a Facebook post: "Without any engineering expertise, it looks to me that this is not one specific fault or defect, but rather different problems in different units resulting in the rain coming in... Nevertheless it all needs to be dealt with."
Dr Puthucheary said the project's contractors assured him that they will fix the water seepage problem by this week.