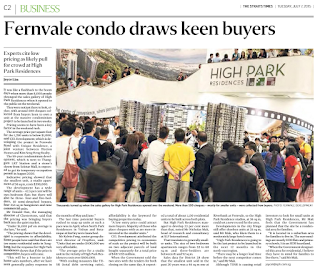 It was like a flashback to the boom days when more than 8,000 people thronged the sales gallery of High Park Residences when it opened to the public on the weekend.
They were not just there to look, either, with around 500 cheques collected from buyers keen to own a unit at the massive condominium project to be launched in two weeks.
Pricing seems to have been a key factor in the weekend rush.
The average price per square foot for the 1,390 units is below $1,000, said CEL Development, which is developing the project in Fernvale Road with Unique Residence, a joint venture between Heeton Homes and Kim Seng Heng Realty.
The 99-year condominium development, which is next to Thanggam LRT Station and a stone's throw from Seletar Mall, is expected to get its temporary occupation permit in August 2020.
Indicative pricing showed that the smallest unit, a studio apartment of 36 sq m, costs $398,000.
The development has a wide range of units - 42.5 per cent will be two-bedroom flats but there will also be three- four-and five-bedders, 10 semi-detached houses, four 254 sq m bungalows and nine commercial units.
Mr Donald Han, the managing director of Chestertons, said that the pricing was bringing buyers back into the quiet market.
"Under $1,000 psf on average is the lure," he said.
"The pricing shows that the developer is responsive to affordability. Some people have said that there are too many residential units in Sengkang, but the response for High Park Residences shows that if the price is competitive, buyers will come.
"This will be a booster to July home sales numbers, after we have seen generally paltry response in the months of May and June."
The last time potential buyers rushed to snap up units at such a pace was in April, when North Park Residences in Yishun and Botanique at Bartley were launched.
Mr Kelvin Fong, senior group district director of PropNex, said: "Units that are under $400,000 are very affordable.
"The average price for a studio unit in the vicinity of High Park Residences costs over $500,000.
"With cooling measures like TDSR (total debt servicing ratio), affordability is the keyword for buying properties today.
"A low entry price could attract more buyers. Majority of those who place cheques with us are more interested in the smaller units." 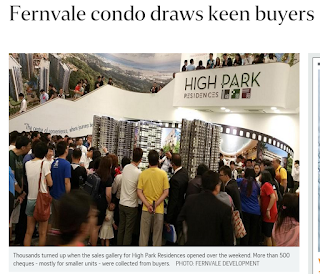