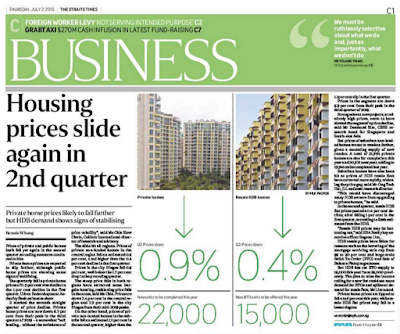 Prices of private and public homes both fell yet again in the second quarter as cooling measures continued to bite.
Private home prices are expected to slip further, although public home prices are showing some signs of stabilising.
The quarterly fall in private home prices of 0.9 per cent was similar to the 1 per cent decline in the first quarter, Urban Redevelopment Authority flash estimates show.
It marked the seventh straight quarter of price decline. Private home prices are now down 6.7 per cent from their peak in the third quarter of 2013 - a somewhat "soft landing... without the turbulence of price volatility", said Ms Chia Siew Chuin, Colliers International director of research and advisory.
The slide hit all regions. Prices of private non-landed homes in the central region fell an estimated 0.5 per cent, a tad higher than the 0.4 per cent decline in the first quarter.
Prices in the city fringes fell 0.5 per cent, well below the 1.7 per cent drop in the preceding quarter.
The steep price falls in both regions have attracted some bargain-hunting, cushioning price falls in the areas, said Ms Chia. Prices are down 7.4 per cent in the central region and 7.9 per cent in the city fringes from their mid-2013 peaks.
On the other hand, prices of private non-landed homes in the suburbs fell an estimated 1.2 per cent in the second quarter, higher than the 1.1 per cent dip in the first quarter.
Prices in the segment are down 5.3 per cent from their peak in the third quarter of 2013.
Strong sales at new projects, at relatively high prices, seem to have slowed the segment's price decline, said Mr Desmond Sim, CBRE research head for Singapore and South-east Asia.
But prices of suburban non-landed homes are set to weaken further, given a mounting supply of new condos. A total of 21,994 private homes are due for completion this year and 20,971 next year, adding to 19,941 units completed last year.
Suburban homes have also been hit as prices of HDB resale flats have corrected more rapidly, widening the price gap, said Mr Ong Teck Hui, JLL national research director.
"This would have discouraged many HDB owners from upgrading to private homes, " he said.
In the second quarter, resale HDB flat prices posted a 0.4 per cent decline, after falling 1 per cent in the first quarter, according to flash estimates from the HDB.
"Resale HDB prices may be bottoming out," said ERA Realty key executive officer Eugene Lim, .
HDB resale prices have fallen for reasons such as the lowering of the mortgage servicing ratio cap from 35 to 30 per cent and large-scale Build-To-Order (BTO) and Sale of Balance Flats programmes.
But HDB has cut BTO supply to 15,000 this year from 25,000 previously. The plan to raise the income ceiling for a new flat could see more demand for BTOs and spillover demand for resale flats, Mr Lim noted.
Private home prices are tipped to fall 4 to 6 per cent this year, while resale HDB flat prices may fall to a lesser degree.
The Straits Times/ Business                                         Published on Thursday, 2 July 2015             By Rennie Whang
Housing prices slide again in 2nd quarter
Please click the following for other Related Readings: