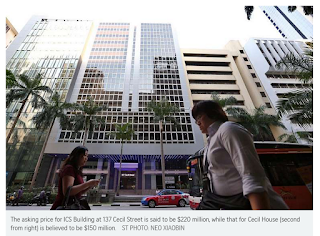 The struggling strata office market may have prompted the owners of two adjacent buildings in Cecil Street to consider putting their properties up for sale.
Mr Cheong Sim Lam, whose family developed International Plaza, is understood to be asking $220 million for ICS Building, which is the former Aviva Building.
The 12-storey office building with two basements has a net lettable area of about 6,525 sq m and sits on a 920 sq m freehold site.
Mr Cheong bought 137 Cecil Street from Yi Kai Group and Fission Group shortly after the firms had paid $65 million for the property in July 2009. It is not known how much he paid as the transaction was through a sale of shares.
The owners of neighbouring Cecil House at 139 Cecil Street are also said to be considering selling at an asking price of $150 million.
Vibrant Group and DB2 Group bought the 11-storey office building from Mr Cheong in June last year for $110 million. Cecil House sits on a 737 sq m site with about 65 years left on its lease.
A Vibrant Group spokesman said it is waiting for building plans to be approved before it starts alteration work. The plan is to strata-subdivide and sell the property, he said.
Vibrant and DB2 are also part-owners of GSH Plaza, which has sold about 60 out of a total of 259 strata office units since launching in April. The owners are said to have reserved about 40 of these units, while caveats for 17 have been lodged at an average of $3,125 per square foot (psf).
Crown@Robinson, where caveats for eight units have been lodged at an average of $3,513 psf since its launch in April, also reflects the stalling strata office market.

Strata office sales were booming between 2011 and 2013 when many projects were launched. But the implementation of the total debt servicing ratio framework from June 2013 and the completion of some of these projects have constrained the market, said Savills Singapore research head Alan Cheong.
Developers have scaled down unit sizes to keep lump sum prices affordable, he noted. Units at GSH Plaza are priced from sizes of 480 sq ft to 1,700 sq ft, while those at Crown@Robinson are from 592 sq ft to 1,152 sq ft.
Added Mr Cheong: "End users find it challenging to fit into such unit sizes. Some recent completions have caused potential buyers to question if they will be able to find tenants."
For instance, Paya Lebar Square, where close to 57 per cent of the 556 strata office units are under 550 sq ft, has an occupancy of about 15 per cent. The development was completed in the fourth quarter of last year.
The Straits Times/ Business                        Published on Thursday, 23 July 2015                            By Rennie Whang                                         Two Cecil Street buildings being considered for sale