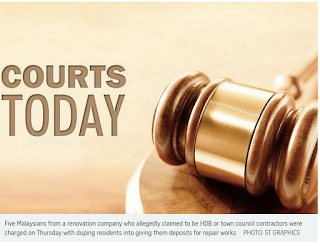 SINGAPORE - Five Malaysians from a renovation company who allegedly claimed to be HDB or town council contractors were charged on Thursday with duping residents into giving them deposits for repair works.
They each face between two and five charges involving a total of $300 to $830.
The five, from Shinden General Contractor, are believed to have entered homes by pretending to be from the Housing Board, town councils and other government agencies. They would then try to get home owners to agree to renovation or repair works.
Khaw Ee Leong , 27, who is represented, allegedly cheated a Potong Pasir resident of $200 on April 8 last year.
A second charge accuses him of scheming with Chong Sin Yu, 33, to cheat residents of Block 12 Lorong 7 Toa Payoh and as such, induced a 64-year-old man into delivering $200 to Chong on May 9 last year.
Chong faces five charges involving a total of $830. He is said to have also conspired with others to cheat residents in Yishun Street 11 and Jalan Batu as well as deceiving two individuals into giving him $210.
Ooi Chong Hee, 38, and Ng Huay Yin, 42, allegedly conspired to cheat a 76-year-old resident at Block 263 Waterloo Street into believing that they were both contractors of the Town Council and induced her to give $450 to Ng as deposit for repair works on Nov 14 last year.
Ooi is also said to have conned a resident in Hougang Street 11 into believing that HDB would be coming to change a kitchen pipe and induced her to hand over $300; He is also accused of deceiving another person of $200.
The total amount involved in Ng's four charges is $300.
Phua Kok Seong, 26, is said to have conspired with others to cheat residents in Potong Paisr Avenue 1 and Serangoon Central. He allegedly induced a 78-year-old man and a 59-year-old woman to give him $300 each.
Each was offered bail of $15,000.
Khaw's case is fixed for a pre-trial conference on Aug 12 while the others will be back on July 30.
The maximum punishment for cheating is 10 years' jail and a fine.
The Straits Times/ S'pore                        Published on Thursday, 16 July 2015                                By Elena Chong                                 Renovation company contractors charged with cheating HDB residents