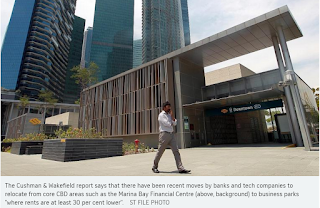 Prime office rents in the Central Business District (CBD) are likely to fall in the next 12 months, while Hong Kong's rents are set to rise, says a new report.
Property consultancy Cushman & Wakefield said on Thursday that it expects rents in Singapore's core CBD to soften by 13.6 per cent through 2016 while those in Hong Kong's greater Central area are set to rise by 12.4 per cent.
Ms Sigrid Zialcita, Cushman & Wakefield's managing director of research for Asia Pacific, said: "This marks a reversal of fortunes between the Hong Kong and Singapore markets."


The firm noted that office rents in the prime areas of Singapore's CBD weakened in the second quarter after more than two years of growth.
Rents here grew by almost 20 per cent from 2012 to last year, but Ms Zialcita said they are "expected to soften as supply pressures emerge in the island state".
She added: "Rental growth in Hong Kong's greater Central has been on a downward trend since 2012 and was seen to have stabilised last year at the HK$96 per sq ft (psf) levels."

Singapore is set to have more than 3 million sq ft worth of new office space completed in the core CBD area next year.

The report noted that Singapore is set to have more than three million sq ft worth of new office space completed in the core CBD area next year. It added that there have been "recent moves by banks and tech companies to relocate to business parks where rents are at least 30 per cent lower".
Standard Chartered Bank is one example. It gave up four out of 24 levels at Marina Bay Financial Centre Tower 1, as the bank will have a 154,000 sq ft extension to its Changi Business Park building, slated for completion by this year.
"Barclays will also allow its lease over two floors in One Raffles Quay to expire," the firm added.
Tech giants like Google and Microsoft are already expected to move to Mapletree Business City II in Alexandra when it is ready next year. And more than 300,000 sq ft of space has been left empty by some new tech firms from last year to the first quarter of this year.

Cushman & Wakefield said: "These companies cite ample space options and lower rents in fringe locations, providing them flexibility for expansion and freeing up capital for other expenditures or recruitment."
Ms Zialcita said the sustained trend of stable-to-increasing rental rates over the last year and the increasing attractiveness of alternatives outside the prime areas will continue to change leasing patterns.
She added: "However, we expect the supply overhang in Singapore to gradually be absorbed by 2018. The lack of new business-park supply could lend some measure of support to office rentals in the near term."