With its artisanal coffee shops, numerous dining spots and lively atmosphere, Holland Village, which was once a kampung filled with plantations and nurseries, has developed to become one of Singapore’s hottest lifestyle destinations. Michelle Yee investigates. 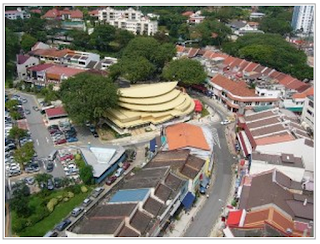 When one thinks of Holland Village, the images that usually come to mind are: cool bars, amazing restaurants, hipster cafés, art galleries and handicraft stores. Not many can imagine what this area, which now features a mix of public and private housing, was like decades ago.
Before 1900, Holland Village was originally a kampong occupied by plantations and nurseries on Jalan Merah Saga (Chip Bee Gardens), and farms within Lorong Mambong. The village was later named after Holland Road, which in turn was named after an early Dutch resident, Hugh Holland. In fact, all the roads within the area – Holland Drive, Holland Avenue and Holland Close are all named indirectly after him.
Later, during the 1950s, Chip Bee Gardens was redeveloped into an exclusive private residential area featuring semi-detached and terrace houses for members of the British army. Over time, the precinct attracted even more expatriates including middle and upper class expat families, which was how Holland Village established its reputation as an expatriate social enclave within an upmarket residential estate.
Chip Bee Gardens: Singapore’s hippest hood
Today, the rows of shops along Jalan Merah Saga house some of the city’s hottest restaurants and cafes, many of which are packed to the brim with diners during weekends. First the art galleries moved in, with Taksu and Sujin leading the charge. Then hip cafes such as Daily Scoop, the Monocle Café, Sunday Folks, and Baker & Cook followed to slake gallery-goers’ thirst. Perennially packed restaurants like Original Sin, Da Paolo, Bistro Petit Salut, and Michelangelo’s Restaurant also made Chip Bee Gardens the estate’s culinary hub du jour. Stylish kitchenware and baking supplies stores Lemon Zest and Phoon Huat round out the eclectic mix. In short, residents living within the Holland Village area have plenty of options when it comes to dining choices, and it will take visitors more than a day to explore the dozens of stores here.
Food paradise
Located just across from Chip Bee Gardens, Lorong Mambong is chock-full of excellent restaurants, bars and pastry shops. Diners will be spoilt for choice with a multitude of options ranging from Mexican, Italian to Japanese, Thai, Korean, Northern Indian and Chinese.
Set for more buzz
While Holland Village seems to be an area that has it all, offering a wide variety of dining and lifestyle options, it is set for more buzz. The Urban Redevelopment Authority’s (URA) draft Master Plan 2013 revealed that a new extension adjacent to Holland Village has been earmarked for private housing developments. The six-ha new extension at Holland Village, which will be completed within the next two years, will add another 1,500 private residential units within mixed developments.
The Holland Village Extension is also set to make this popular lifestyle destination even more exciting. By expanding the Holland Village area with more mixed-use developments, fine-grained intimate streets, public spaces, diverse retail and F&B offerings, local residents and visitors alike can enjoy and better appreciate the unique charm of Holland Village. A new road linking Holland Avenue to Holland Drive will also be built to provide access to a new underground parking station while diverting vehicular traffic away from the centre of Holland Village.
Commenting on how the new Holland Village Extension is set to further develop this area, Wong Xian Yang, Research and Consultancy Manager at OrangeTee said, “As more residents move into the mixed development, the area will see an increase in pedestrian traffic, which is a boon to the retail scene in the area.
“Presently, Holland Village’s biggest market group are young locals and expatriates, while, with the new mixed-use development and depending on the tenant mix, it should enlarge Holland Village’s catchment area.” 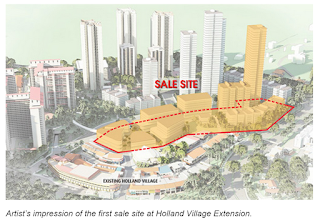 Great location, excellent amenities…
The Holland area (District 10) is one of the three most desired districts in Singapore. This is not only due to its great location and proximity to town, its exclusive private residential estates and a host of conveniences, but also because of its pleasant surroundings.
It is surrounded by the island’s most exclusive homes, universities, private hospitals, embassies, science parks and a wide variety of up-market facilities and retail establishments, which serve the well-heeled expatriates and locals who live nearby.
“Besides its close proximity to the city, another thing that makes Holland such a popular district is definitely its proximity to One North, the new science business park,” shared Wong.
He added that families with young children would also be keen on staying at Holland Village as schools such as the Singapore Institute of Management (SIM), National University of Singapore (NUS), Anglo Chinese Junior College (ACJC) and Anglo Chinese School (International) are only a short drive away.
Public transport access to the area has also improved tremendously with the opening of Holland Village MRT Station on the Circle Line in 2011.