HDB trims number of BTO flats on offer. With the resale market stabilising, it will offer 15,000 units instead of planned 16,900 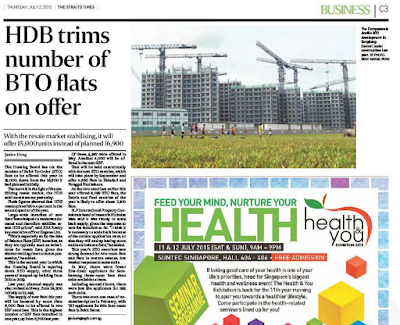 The Housing Board has cut the number of Build-To-Order (BTO) flats to be offered this year to 15,000, down from the 16,900 it had planned initially.
The move is in the light of the stabilising resale market, the HDB said in a statement yesterday.
Flash figures showed that HDB resale prices fell 0.4 per cent in the second quarter of the year.
Large-scale launches of new flats "have helped to moderate demand and therefore stabilise resale HDB prices", said ERA Realty key executive officer Eugene Lim.
"This is especially so for the Sale of Balance Flats (SBF) launches, as they are typically seen as substitutes for resale flats, given the shorter waiting time to vacant possession," he added.
This is the second year in which the Housing Board is tapering down BTO supply, after three years of ramped-up building from 2011 to 2013.
Last year, planned supply was also revised midway, from 24,300 initially to 22,455.
The supply of new flats this year will be boosted by more than 9,000 flats to be offered in two SBF exercises. This is the highest number of SBF flats launched in one year, up from 6,700 last year.
Of these, 5,387 were offered in May. Another 4,000 will be offered in the next SBF.
That will be held concurrently with the next BTO exercise, which will take place by September and offer 4,860 flats in Bidadari and Punggol Northshore.
As the two exercises earlier this year offered 8,039 BTO flats, the fourth and final exercise of the year is likely to offer about 2,100 flats. 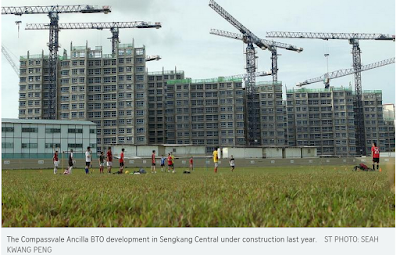