SINGAPORE - Residents of Pasir Ris will have the town's first hawker centre by 2017, the National Environment Agency said on Sunday at the centre's groundbreaking ceremony near the Pasir Ris Sports and Recreation Centre.
The centre, which will have 45 cooked food stalls and more than 800 seats, will be next to the recreation centre and within walking distance from Pasir Ris MRT station.
A multi-storey carpark above the hawker centre will also have 115 parking lots and 60 bicycle parking lots to take into account the cycling path network around Pasir Ris. Part of the cycling path will lead cyclists right up to the hawker centre.
The centre's stalls and dining areas will be arranged in a fan shape facing Pasir Ris Town Park, so that diners can feel like they are having their meals in a park. Family-friendly features such as lowered seats for children and the elderly, diaper-changing and nursing rooms on both floors of the hawker centre and three lifts will al so be installed.
Deputy Prime Minister Teo Chee Hean, the guest-of-honour at the ceremony, said the hawker centre will bring residents together for meals and help them to recharge after sports. "It also has a very nice view into the park, and is in keeping with having a nice green setting in Pasir Ris as well as new facilities," he said.
Mr Teo, who is also MP for Pasir Ris-Puggol GRC, noted that all of Pasir Ris's precincts will undergo the Housing Board's (HDB) Neighbourhood Renewal Programme in the next few years: "Many residents want to see the continuation of having a good amount of greenery in Pasir Ris, but they also want to see new developments, for an example an integrated town hub. HDB is looking at all of their suggestions." 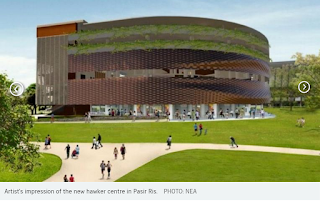 Exhibition panels featuring the new hawker centre's layout, and artist's impressions of it, will be on display at the Pasir Ris Sports and Recreation Centre until Tuesday July 21.
Pasir Ris resident Tan Phei See, a 38-year-old homemaker who eats out about three to four times a week, said she was looking forward to its opening. "With more and more people living in Pasir Ris, this hawker centre will be very convenient for us and hopefully offer cheaper food," she said.