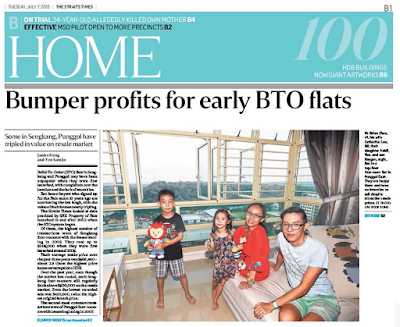 Build-To-Order (BTO) flats in Sengkang and Punggol may have been unpopular when they were first launched, with complaints over the location and the lack of amenities.
But home buyers who signed up for the flats some 10 years ago are now having the last laugh, with the value of their homes nearly tripling.
The Straits Times looked at data provided by SRX Property of flats launched in and after 2002 when the BTO system began.
Of these, the highest number of transactions were of Sengkang four-roomers with the leases starting in 2009. They cost up to $205,000 when they were first launched around 2005.
Their average resale price over the past three years was $566,880 - about 2.8 times the highest price home owners paid to HDB.

Over the past year, even though the market has cooled, such Sengkang four-roomers still regularly fetch above $500,000 on the resale market. Even the lowest recorded sale was $410,000, twice the highest original launch price.

The second-most-common transactions were of Punggol four-roomers with leases beginning in 2007.


The impact of housing credit on personal bankruptcy