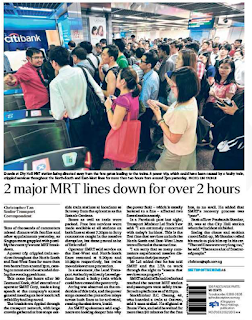 Tens of thousands of commuters missed dinners with families and other appointments yesterday, as Singaporeans grappled with possibly the country's worst MRT breakdown.

A power trip crippled train services throughout the North-South and East-West lines for more than two hours from around 7pm, causing commuters to be stranded during the evening peak hour.
This came just hours after Mr Desmond Kuek, chief executive of operator SMRT Corp, made a long speech at the company's annual general meeting on how much rail reliability had improved.
The breakdown rippled through the transport network, with large crowds gathered at bus stops outside train stations at locations as far away from the epicentre as the Botanic Gardens.
Buses as well as taxis were packed. Free bus services were made available at all stations on both lines at about 7.20pm to ferry commuters caught in the massive disruption, but these proved to be of little relief.
Operator SMRT said service on the East-West and North-South lines resumed at 9.20pm and 10.35pm respectively, but trains moved slower as a precaution.
In a statement, the Land Transport Authority said early investigations found a faulty train which could have caused the power trip.
Arcing was observed on the underside of this train, and the power surge caused the protective relays across both lines to be activated, causing the shutdown, it said.
An SMRT spokesman said engineers are looking deeper into why the power fault - which is usually isolated to a line - affected two lines simultaneously.
In a Facebook post last night, Transport Minister Lui Tuck Yew said: "I am extremely concerned with today's incident. This is the first time that services on both the North-South and East-West Lines were affected at the same time.
"I am sorry that so many commuters experienced massive disruptions to their journeys."
Mr Lui added that he has told SMRT and the LTA to work through the night to "ensure that services run properly ".
SMRT said all affected trains had reached the nearest MRT station and passengers were safely transferred to platforms as of 8.01pm.
Stockbroker B.C. Cheong, 48, who boarded a train at Outram, said it soon stalled. He alighted at Buona Vista, and said he waited for more than 30 minutes for the free bus, to no avail. He added that SMRT's recovery process was "poor" .
Bank officer Prashanth Shankar, 32, was at the City Hall station when the incident unfolded.
Seeing the chaos and sudden crowd build-up, Mr Shankar called his uncle to pick him up in his car. "The taxi lines were very long too," he said. "There are a lot of frustrated people."
The Straits Times/ Top of the News                                      Published on Wednesday, 8 July 2015  By Christopher Tan, Senior Transport Correspondent                                                                          2 Major MRT lines down for 2 hours