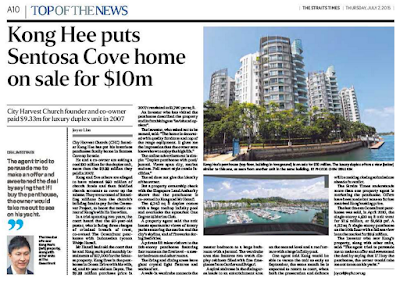 He and a co-owner are asking a cool $10 million for the duplex unit, more than the $9.33 million they paid in 2007.
Kong and five others are alleged to have misused $50 million of church funds and then falsified church accounts to cover up the misuse. They are accused of funnelling millions from the church's building fund to pay for the Crossover Project, to boost the music career of Kong's wife Ho Yeow Sun.
In a trial spanning two years, the court heard that the 50-year-old pastor, who is facing three charges of criminal breach of trust, co-owned The Oceanfront penthouse with Indonesian tycoon Wahju Hanafi.
Mr Hanafi had told the court that he and Kong each paid monthly instalments of $17,000 for the Sentosa property. Kong lives in the penthouse in Ocean Drive with his wife, 45, and 10-year-old son Dayan. The $9.33 million purchase price in 2007 translated to $1,780 per sq ft.

DEAL SWEETENER
The agent tried to persuade me to make an offer and sweetened the deal by saying that if I buy the penthouse, the owner would take me out to sea on his yacht.
The investor who saw Kong Hee's property, along with other units at The Oceanfront

An investor who has visited the penthouse described the property and its furnishings as "lavish and opulent".
The investor, who asked not to be named, said: "The home is decorated with quality furniture and top of the range equipment. It gives me the impression that the owner sure knows how to enjoy the high life."
The online advertisement is simple: "Duplex penthouse with pool/ jacuzzi. Views span city, marina and sea. Full resort-style condo facilities."
The ad does not give the identity of the owner.
But a property ownership check with the Singapore Land Authority shows that the penthouse is co-owned by Kong and Mr Hanafi.
The 5,242 sq ft duplex comes with a huge rooftop infinity pool and overlooks the upmarket One Degree 15 Marina Club.
A property agent said the unit boasts spectacular views of luxury yachts entering the marina and the city's skyline, and of fireworks during festivities. 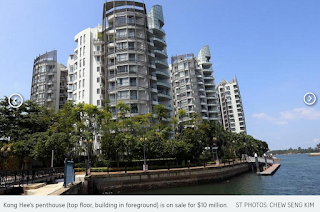 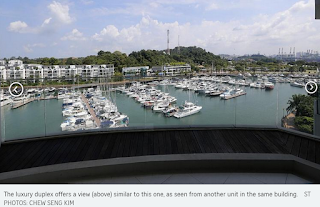 A private lift takes visitors to the 11th-storey penthouse featuring four rooms on the first level - a master bedroom and other rooms.
The living and dining areas have giant crystal light fixtures and works of art.
A walk-in wardrobe connects the master bedroom to a huge bathroom with a jacuzzi. The wardrobe area also features two watch display cabinets filled with fine timepieces from Cartier and Bvlgari.
A spiral staircase in the dining area leads to an entertainment area on the second level and a roof terrace with a huge infinity pool.
One agent said Kong would be able to vacate the unit as early as September, the same month he is expected to return to court, when both the prosecution and defence will be making closing submissions ahead of a verdict.
The Straits Times understands more than one property agent is marketing the penthouse. Offers have been made but none so far has matched Kong's asking price.
The last time an Oceanfront penthouse was sold, in April 2010, the single-storey 4,510 sq ft unit went for $7.5 million, or $1,663 psf. A 4,112 sq ft single-storey penthouse on the 10th floor with a full sea view is on the market for $9.5 million.
The investor who saw Kong's property, along with other units, said: "The agent tried to persuade me to make an offer and sweetened the deal by saying that if I buy the penthouse, the owner would take me out to sea on his yacht."
The Straits Times/ Top News                                                      Published on Thursday, 2 July 2015 By Joyce Lim                               Kong Hee puts Sentosa Cove Home on sale for $10m